A challenging trekking holiday around Manaslu in the Nepal Himalaya. Manaslu at 8163 metres (26783 feet) is the eighth tallest mountain in the World. Situated close to the border with Tibet, some 100 km (62 miles) northwest of Kathmandu. This area has always seen relatively few trekkers when compared to the more popular regions of the Annapurna and the Khumbu, partly because of the greater logistics required. The quiet trails and simple villages, together with the stunning scenery around Manaslu make this one of the classic yet unspoilt trekking advenutres in the Himalaya. Travelling via Gorkha on the south of Manaslu, we start from the town of Soti Khola and ascend the impressive gorge of the Budi Gandaki, passing through tiny villages perched on the steep valley sides, to reach the Tibetan world beyond the village of Ghap. Here, the valley starts to open out, and there are remarkable panoramas of the peaks on the Nepal-Tibet border, as well as those of the Manaslu group. Few travellers penetrate this high and mysterious valley, which once had much more important trading links with Tibet than it does today, and we have the feeling of entering a secret Buddhist world of monasteries, mani walls and prayer flags. The scenery becomes even more impressive as we climb up into the alpine environment on the approach to the Larkya La (5135m), with big peaks on all sides. The principal peaks that we will see on this first part of our trek are Himal Chuli, Manaslu, Cheo Himal and Himlung Himal. Beyond the Larkya La, we drop down into the heavily forested valley of the Marsyangdi River, where we are now trekking beneath the giants of the Annapurna range, following the river down to a meeting with the roadhead. This is classic Nepal trekking as used to be!

Arrival in Kathmandu airport. There you will meet our company staff and transferred to hotel by private tourist vehicle. Overnight at hotel at tourist standard hotel with BB plan.

Issue a permit and brief regarding about the trip.Our experienced tour guide will guided to the cultural and historical places of Kathmandu city:Pashupatinath temple,Syambhunath stupa,Boudhanath stupa,Kathmandu durbar square.O/N in Kathmandu

Our trekking staff will come to your hotel early in the morning at 7:30am to pick you up, from there we have an 6 hour driving journey to Soti Khola. O/N at mountain lodge.

The trail descends slowly until you climb again to mountain ridge to Almara. Pass the forest trail to arrive at Riden Gaon. The valley here cuts into another side of the river to enter Budi Gandaki. At Lambesi, the trail follows down to the sandy river bed of Budi Gandaki. Camp tonight at Machha Khola.

After crossing Machha Khola and Khrola besi, there is a hot spring called “Tatopani”. The trail follows forested area after this toward Dovan. Below Dovan, there is a huge rapid at Budhi Gandaki. As the elevation increases, the rapids and the scenery undergoes a complete transformation. At Jagat, there is a police check-post where your trekking permit will be checked.

After ascending to a terraced hill of Saguleri and view of Sringi Himal (7177 m) we continue toward Sirish Gaon, Gandaki valley narrows from here with soaring abrupt walls.

Follow the trail upstream of Deng Khola– a tiny village of 4 houses. We walk through a newly built rock tunnel from here, thus avoiding the traditional steep climb. At Ghap, the Tibetan culture begins with Mani stones and chortens all around.

After passing through the seemingly deserted seasonal village of Nambachhe, planted with fields of barley and lined with mani walls, we ascend through a dense,cool forest for an half an hour crossing the Budi Gandaki once on a suspension bridge to Namrung (2540m), where we will stop for a cup of tea at a lodge run by a Tibetan family. As we gain altitude, we reach alpine territory and can see mountain views. Namrung village is the start of Nubri, the region of purely Tibetan inhabitants speaking a dialect of western Tibet. Above this village the valley opens out and there are extensive pastures. A few hours later, we reach the village of Lihi(2840m),a substantial altitude gain. We cross a large stream flowing down from the Lidanda Glaciers, and reach the picturesque Tibetan village of Sho (3000m), where we stop for lunch. Look for the bear claw on the upper deck of the house, and across the river to the ruins of an old Tibetan fort. From Sho, the views of Ngadi Chuli are spectacular and further on, towards Lho, we can finally see the views of Manaslu itself;quite an impressive afternoon! We set up camp in Lho, a lively village adorned with many prayer flags, in the yard of a small lodge. Sunset and sunrise from the lodge are wonderful and the small gompa just below lodge worth a visit.

Walking through the upper reaches of Lho, with the snowy peaks of Manaslu ahead of us in the distance, we pass the new gompa and then ascend through light forests next to a small river to reach the Tibetan settlement of Shyla, where the villagers are often out in the fields. Another few hours of trekking through classic alpine scenery leads us past Tibet grazing settlements, the train to Pung Gyan Gompa, and then Sama Gaon. Sama Gaon sits in a bowl at the foot of the pastures leading to the high peaks, with mani walls, a small gompa and tightly packed rows of houses at the lower reaches of village, and the large gompa at the upper reaches. The people settled here from Tibet over 500 years ago, and the two gompas date from this time, both having unique architecture and built of wood. The Tibetan villages here have entrance gates which are very distinctive from the Tibetan ones, and they maintain an active trade with their co-religionists in Tibet (notice the Chinese brandy and beer on sale). If the weather is good, you will see the village women weaving wool (baal) from Tibet into gowns – which are then traded back to Tibet. Taxes were actually paid to the Dzongka Dzong (fortress) at the border of Tibet, a few days walk from Sama Gaon, as late as the 1940’s until it was taken over by the Gorkas in the late 19th century. Later, after 1959, the region was home to Tibetan guerillas, and thus closed to trekking until 1992.Take the afternoon to hike up to the gompa above town, and to wander the streets of the fascinating Sama Gaon village.

On our rest day here why not a day trip to the border of Tibet; no passport required. It takes five hours walking to the Gya La (‘large pass’) to do just that, and then take in the views and ruminate on the border markers at the top: ‘China, 1962.’ We will probably share the trail with groups of Samdo residents, carrying timbers over the border to Tibet. True High Asia! Like the people of Ro, Samdo inhabitants are Tibetan, and were ceded the land by the king of Jumla over 500 years ago; but, unlike the Ro people, they only claimed their land after the Chinese takeover in the early 1950s. Since then they have established a trade with China and India, marketing among other things, the aphrodisiac root that grows in the region. We’ll try to get into some of the local houses for chang (Tibetan barley beer), salt butter tea and perhaps a few carpets to buy!

As Samdo is in high altitude,you need to walk slowly so, this is a short day trek.You will notice extended yak pastures up a broad valley with long mani walls, with a variety of birds.From there, you will leave the tree line and climb to a ridge across the wooden bridge of Budi Gandaki.Once you reach at Samdo, you can explore the nearby villages or you can hike to Samdo Peak. The Larkya La trail is on the left above the valley. You can also see the main track for Tibet over the Larjyang La forming slopes on the Larkya La trail.

This is another adventurous day in the high altitude.So,you must watch your body properly. Enjoying the scenic views of the chain of Himalayas you will walk slowly across the rugged terrains of Manaslu region before you reach Dharmasala.Dharamsala is a beautiful village that offers the best place for relaxation. The views are marvelous.

We leave on the trade route to Tibet and climb through the ruins of Larkya bazaar, one of the trade markets that flourished years back. After two hours of climbing past glaciers, with increasingly awe-inspiring panoramas, we come to the campsite at Dharamsala, where we have lunch and gaze out at the views. You’ll really feel the altitude and the cold here, so enjoy a more leisurely afternoon and keep warm. We’ll have an early dinner in preparation for our pass crossing tomorrow.

After a short climb above the campsite, we reach the ablation valley on the North side of the Larkya Glaciers where we have views of Cho Danda and then of Larkya Peak. We continue across the moraines of the glacier, making a gradual ascent which becomes steeper only in the last section to the pass, which should take us about three hours to crest. From the pass, there are outstanding views of Himlung Himal, Cheo Himal, Kangguru and the huge Annapurna II. If there is fresh snow, we may see Snow Leopard prints from the evening before; it’s also blue sheep (Bharal) and Tibetan Snow Cock territory.The views from the top of the pass are truly unbelievable. After hanging our Tibetan prayer flags, and yelling ‘Ki ki so so lha gyalo’ (may the Gods be victorious), get ready for a steep, ankle straining drop to a trail following the glacial moraine, very slippery if covered in snow so have your ‘Yak tracks’ ready if you’ve brought them, and definitely use trekking poles. It is a longer day then usual to our campsite at Bimtang, but to walk into these low pastures with the evening mist coming in and Manaslu; it’s an experience not to be missed. A boulder-strewn descent brings us, finally, to Bimtang, where the three sisters of the ‘Three Sisters Hotel’ are on hand with Himalayan chilled beer.

The campsite at Bimtang is frigid in the morning, so get to the dining tent quickly for a cup of fresh coffee! Porters pour hot water over tent pegs to get them out. Pee bottles freeze. No option if you want to get warm, move down valley into the sun, through forested hillsides to Tilce, at the end of our lost world. Here the inhabitants are a mix of Manangis (of Tibetan descent) and Chettris (Hindus), so eat a mix of dal bhaat, buckwheat dhindo, tsampa and Tibetan tea. The gorge ahead marks the land of apple pie, cold beers and hot showers – the Annapurna Circuit.

After breakfast,walk for about 4-5hrs to Dharapani.

Travel by jeep then stop for lunch and then continue to Kathmandu.O/N in Kathmandu.

After breakfast, the trip ends, our Airport Representative will drop you to the Kathmandu international airport for your final flight departure from Nepal. 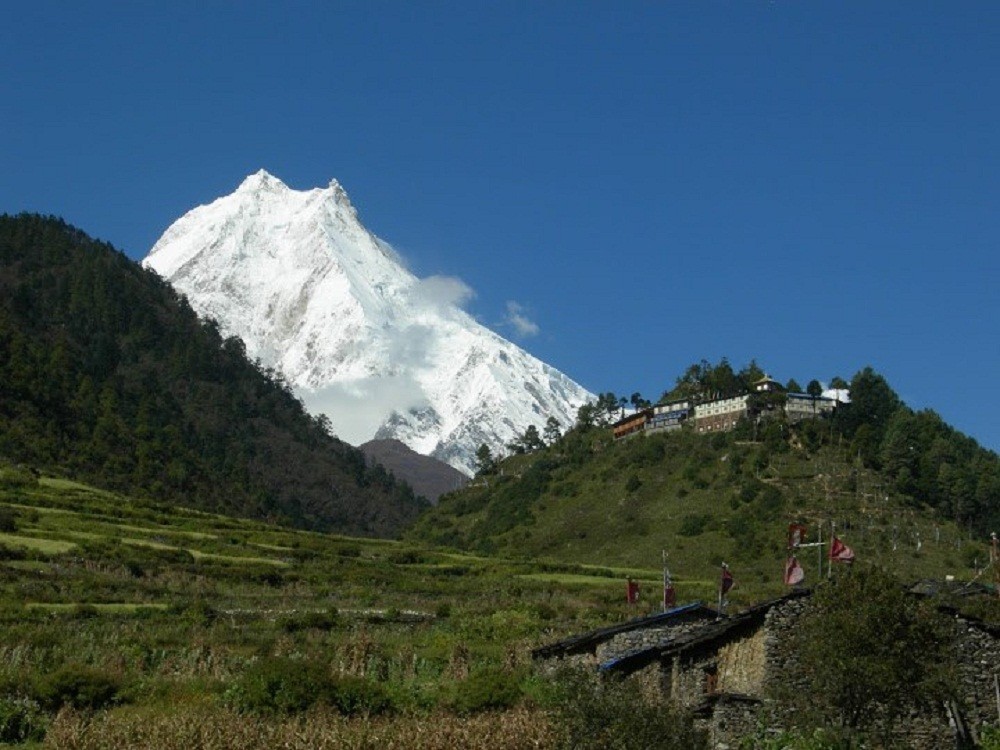 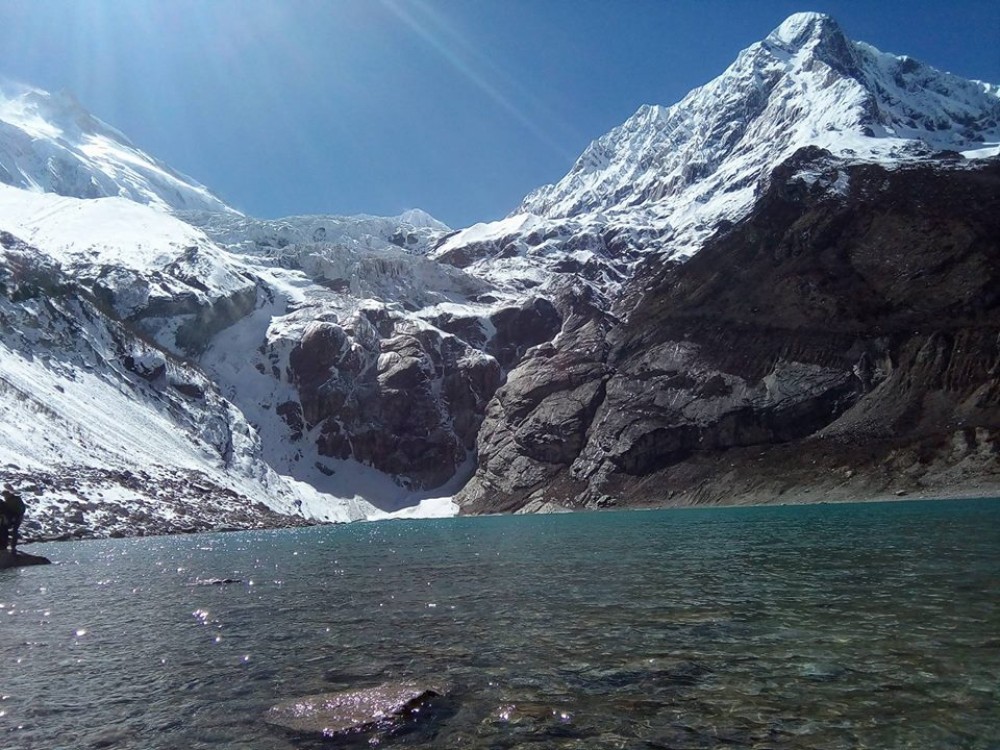